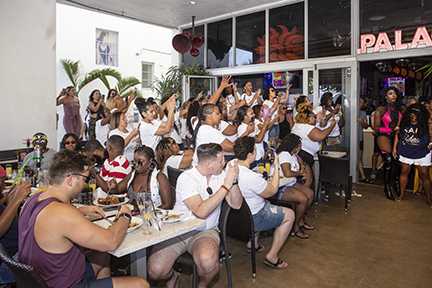 Looks like Palace Bar has a new home in Miami Beach

Miami Beach’s popular Palace Bar closed this year on a holiday and is reopening around another.

Shuttered since July 4, it is expected to return before Thanksgiving to a new location on Ocean Drive and 10th Street, according to The Miami Herald.
The new Palace Bar will reportedly replace the Amarillo South Beach bar and grill and feature the popular drag brunches that had made it a hotspot for decades. It has a larger terrace with awnings for the performances, as well as a dance floor area

“I’m very excited. This is the space I’ve been looking at for more than seven months,” owner Thomas Donall told the Herald. “I couldn’t ask for a better place on Ocean Drive.”

In a story by NBC6, performer Joanna James said she agreed: “I love this new spot. It’s bigger. It’s more set-up for the types of shows that we do,” James said. “We’re still going to be out there on the sidewalk gathering in tourists, but we got more space here and, it’s a step up. It’s a little bit more glamorous.”

Since 1988, The Palace was home to colorful, glamorous drag queens who wowed locals and tourists on the ground floor of 1200 Ocean Drive. The performers were known for doing splits and flips before passers-by. Some even leaped from passing tour buses.

The bar’s tagline: “Every queen needs a palace.”

But when Donall couldn’t reach an agreement with the building’s new owner Infinity Real Estate, he decided to close the bar until a new permanent home could be found. In the meantime, he began hosting a weekly tea dance party on the rooftop of the Clevelander South Beach Hotel in August.